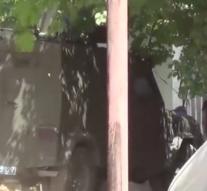 - "A politician of Turkish ruling party AK Wednesday shot dead outside his home in the restive southeast of the country. The suspicion is soon off to the PKK, the Kurdish extremist movement that Turkish officials declared more or less outlawed anger over the recent dismissal of dozens of Kurdish mayors."

"Wednesday killed Ahmet Budak, who have made a futile throw last year parliamentary election lived in Semdinli in Hakkari province. That extreme southeast corner of Turkey bordering Iran and Iraq. Since the PKK after last year's floundering peace process took up arms again, in southeastern Turkey, thousands of soldiers and officers, rebels and civilians killed."