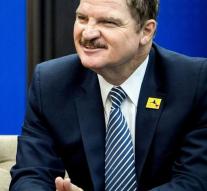 oranjestad - Exactly one year after the chaotic shooting at protesters from the Aruban parliament the Public Prosecutor in Oranjestad still no gunman caught in the act. The opposition on the Caribbean island finds it ridiculous and fears a new cover-up.

'This is very unpleasant,' said human rights lawyer Edwina Henriquez who saw the flashes of light and heard the sound of the shots on August 27 2015. 'Three people were unjustly almost four weeks for arson, but figures who shoot their gun Empty direction protesters walk freely. 'There were fortunately no injuries.

After a day of peaceful demonstrations against the AVP government of Prime Minister Mike Eman ran the evening out of hand. The parliament door was shattered. Perhaps fearing that the angry mob would storm the building, went unidentified law enforcement their gun. Video can be heard the shots. Henriquez: 'During my interrogation told a detective that fired a total of seventeen bullets. '


The human rights lawyer expresses fear that many Arubans: 'It seems that the OM is an extension of the Prime Minister. In any event, working in the prosecutor's immediate family of a minister, an MP and a former close adviser to the ruling party. It does not work. I do not understand Netherlands permits. '

According to the prosecution, the investigation is not yet completed the shooting. 'We would like to have seen otherwise, but it just happens as it is. 'Earlier the OM already stated to this newspaper that the workers' are selected on ability, which is not given political preference. '