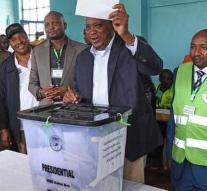 nairobi - After months of tensions and presidential elections that had to be repeated, the two main political fighters in Kenya decided to bury the hatchet. President Uhuru Kenyatta and opposition leader Raila Odinga met in Nairobi and agreed to resolve their conflicts. 'We recognize that this country is bigger than one person,' Kenyatta said.

The two leaders want to set up a special organ that deals with ethnic tensions, corruption and the big differences between rich and poor. Politics in the East African country, which counts dozens of ethnic groups, is dominated by tribal rivalry.

Odinga lost the presidential election in August, but the Supreme Court declared the ballot box invalid. Odinga did not participate in the 'second chance' on October 25, because he said he would not be fair.