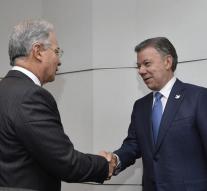 bogota - Colombian President Juan Manuel Santos and his political rival Alvaro Uribe are willing to work together for the peace treaty with the rebel group FARC. In a meeting Wednesday they have spoken to solve the different views in the peace declaration and work on the peace agreement.

Santos wrote a referendum after having reached an agreement, assuming that the voters would give him the blessing. Uribe, who campaigned against the agreement seemed to be a voice in the wilderness. As Uribe saw many voters in Santos' agreement a misguided reward for the crimes of the FARC. So the members would not jail if they repent of crimes and getting the movement automatic seats in parliament.