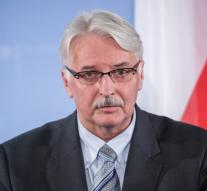 warsaw - Five Polish sailors for the Nigerian coast are kidnapped after their cargo ship was attacked by the kidnappers. The incident highlights the need to review the safety procedures for ships in that area, said Polish Foreign Minister Witold Waszczykowski Friday.

The minister said the kidnappers have made ​​no demands until now. The Polish government is in contact with the Nigerian authorities on the matter, he said. " This is a responsibility of the sovereign state of Nigeria ", he added.

There are no traces of blood were found on the ship, sailing under the flag of Cyprus. The kidnapped crew members are the captain and officers. The rest of the crew, eleven people, is still on the ship. The ship, which suffered minor damage, anchor has gone up 56 kilometers from the Nigerian coast.

The area where the kidnapping took place is not known as an area where pirates often operate.