Home / World / Polish president does not want to talk to Tusk 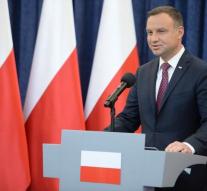 brussels - Polish President Andrzej Duda refuses to meet EU President Donald Tusk for a conversation about the controversial justice reforms in Poland. Duda has dropped an invitation from Tusk, himself Pool and former premier of the country, confirming EU sources in Brussels.

According to Duda's Cabinet Chief, the president sees no room for intervention by the head of the European Council, reports the Polish press office PAP. The Polish Foreign and Justice Ministers did not even attend this week at a request for dialogue by Frans Timmermans, Vice-President of the European Commission.

In Brussels and many Member States, there are great concerns about four new laws that the Government Party Justice and Justice (PiS) wishes to implement judicial reforms. According to Timmermans, they alone threaten the independence of the judiciary, but all four together bring justice to them under the full political control of the government.

Timmermans called Warsaw on Wednesday to 'put on hold' and is now preparing legal steps.