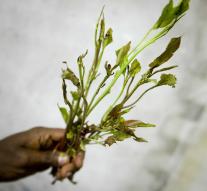 gdansk - The Polish police have seized in port city of Gdansk for more than three tons of khat. The drugs were to be smuggled through Poland to Germany, police announced Monday.

The cat, whose leaves contain amphetamine-like chemicals were shipped in Kenya as being green tea. In connection with the case were arrested five people in Germany. According to the Polish authorities, the street value of khat in Western countries can be up to 660 euros per kilo.