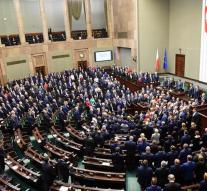 warsaw - The Polish opposition has abandoned its occupation of the parliament in Warsaw after more than three weeks. Since mid-December blocked the parliament building to protest the government style of the conservative party PiS, which include freedom of the press threatened to curtail and displayed according to parliamentarians from middle party PO contempt for democracy.

The controversial plan to give the parliamentary press only sparsely accessing parliament went off. Thus achieved an important goal for the PO. The party showed Thursday that 'the protest is suspended. 'Deep differences remain. If the opposition wants the vote again on the budget, but the ruling party sees nothing.

Match two weeks, the Polish Parliament for the first time together again.