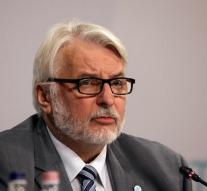 warschau - The Polish Foreign Minister Witold Waszczykowski supports the government party's intention to file a claim against Germany for damage suffered during World War II. 'We need to engage with the Germans in a serious conversation and discuss how to solve the problem,' he told radio station RFM FM.

Relations between Poland and Germany are still overshadowed by the German aggression of 1939 and unresolved post-war questions. The Interior Minister of the Conservative Government in Warsaw, Mariusz Blaszczak, estimates the material war damage of 840 billion euros. 'Maybe more,' Waszczykowski said Monday, because 'precise calculations have not been done for more than seventy years. '

A claim for damages was raised a few months ago in the ranks of the Government Party Justice and Justice (PiS). The Foreign Minister has not yet given a final answer if Poland will actually file a claim. 'This decision can not only be taken by a minister. 'A government statement on the issue is in preparation.

From a moral point of view, 'there is probably no discussion' is that payments to Poland are appropriate, according to the minister. 'Legal is a claim not yet a settled case. '

The Polish Parliament's scientific office is currently investigating whether the country has legal capabilities to claim compensation. Germany states that Poland has waived all claims.