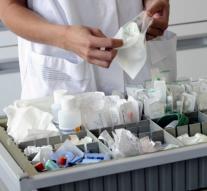 brought - German police warn Brought in for an alternative cancer clinic, just across the border in the Limburg village of Swalmen. Following the death in suspicious circumstances of a Dutch woman, after visiting the clinic.

The 43-year-old woman had breast cancer and was given an alternative cancer treatment in the clinic. Last week she died, according to the police in unexplained circumstances. Shortly before the patient complained of a headache and made them confused. After that she was no longer approachable.

Police calls patients with similar symptoms to consult a doctor. The German public prosecutor shall investigate. At the clinic was Tuesday no one reached for comment.