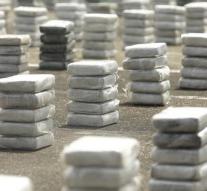 rotterdam - The Rotterdam police have done on its year-end meeting Thursday called for more investigation capacity to fight cocaine smuggling. The market is flooded with cocaine and prices have fallen, finds police chief Frank Paauw. Corruption is thereby facilitated, according to him.

In the port of Rotterdam this year catch records broken and cocaine for several hundred million euros in wholesale value intercepted. By increase in supply is also needed more investigation, said the police chief.

Customs will actually reduce staffing levels, but by protests from police, public prosecutor and mayor Ahmed Aboutaleb is now Secretary of State Eric Wiebes (Finance) consulted on that bet.

Reference is also beneficial CBS figures. The number of Rotterdam which was confronted with crime between 2006 and 2015, declined by almost 40 percent. As of 9100, the number of burglaries decreased since 2012 to 6,000 now, especially in the districts in South Rotterdam. Also, street robberies and robberies showed a downward trend.

However, the commissioner noted that the police a lot of time is spent on measures against possible terrorist, accommodating confused people and increasing tensions in society, such as around the arrival of Sinterklaas. For that 450 officers were deployed.\n  \n  \n   advertisement

Additionally Paauw out his concerns about the use of firearms in the city, sometimes in broad daylight and with great danger to bystanders. He calls it 'unacceptable', exemplified by the fact that landed a bullet from the street in a baby's bedroom in February this year. Because of the civil unrest is a special investigation team put to work.