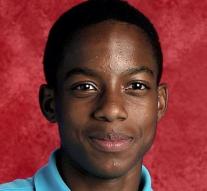 balch springs (us) - An American agent shot a unarmed Afro-American teen last weekend in the US state of Texas, sitting in a car on the way back from a party. A new low point in the police violence against African Americans in the US.

The 15-year-old Johan Edwards was last Saturday with friends at a house party when agents were notified of 'multiple drunk minor children.' Enlisted police officers would have heard shots on the spot, so the statement of the local police force sounds.

In the meanwhile, Edwards and his friends decided to leave the party and drove the group away in a car. One of the police officers opened the fire. With his gun he fired several bullets in the direction of the car. Edwards, who was on the passenger seat, was hit in his head and died on site.

According to the police, the car in which the teenagers were sitting would be driven in the direction of the agents despite the warnings and the police officers would have felt threatened. However, unpublished images made with a dashboard camera show that the car raises the other side, so report different American media.

The responsible agent has been assigned an administrative function. It is not clear whether steps are taken against the man. It seems that it's the second time that American agents have unnecessarily shot a black suspect.