Home / World / Police USA is getting a second army army 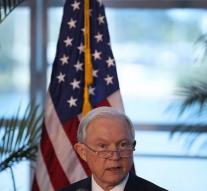 washington - US police forces should again have access to heavy equipment, such as armored vehicles and grenade launchers. President Barack Obama has banned the delivery of such a weapon, but his successor Donald Trump wants to get rid of those restrictions.

Minister Jeff Sessions (Justice) said Monday at a speech that Trump had a presidential order that the police should again have access to 'life-saving equipment.' 'He spoke among other things about kevlar vests and helmets, but according to his department, it does not help.

Trump plans to revitalize the so-called '1033' program in the nineties. This enabled the armed forces to surrender materially to police services. These include weapons, ammunition, armored vehicles, computers and clothes.

'This indicates that we consider the safety of the public more important than what material looks like', the Ministry of Justice stated in a statement. The Obama government had just passed the program after worrying about the 'militarization' of the police.