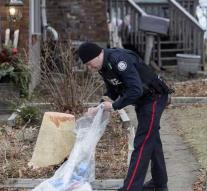 toronto - The Toronto police have now found remains of six persons in the investigation into a suspected serial killer. A 66-year-old gardener was arrested last month in connection with the disappearance of five people. Among them Andrew Kinsman, the owner of a house where the defendant maintained the garden in exchange for being allowed to store his tools and lawn mower in the garage.

Police inspector Hank Idsinga said Thursday in the newspaper The Star that one of the victims has been identified as Kinsman. The detective was hiding body parts around his house, hidden in planters. They turned out to be three different people. Meanwhile the counter is on (pieces of) six bodies. There is not only spit in flower pots but also in the garden itself.

According to Idsinga, the investigation into the killer with the green fingers is far from finished. The attention now goes to about thirty plots elsewhere in the city where the arrested landscaper was busy. It is also checked whether it can be associated with other missing persons than these six.