Home / World / Police to blows with migrants in Calais 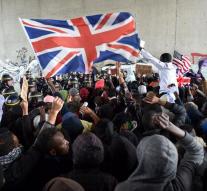 - French police on Saturday used tear gas and water cannons to disperse a demonstration in the port city Calais. Migrants and activists were there taken to the streets to demonstrate against the upcoming closure of the major migrant camp at the site.

About two hundred and fifty migrant sympathizers had, despite a ban by the authorities, gathered under a bridge near the village of asylum seekers, known as 'the jungle'. The police hit clashed with the group when they wanted to reduce the migrants to the camp. Earlier in the day, four buses that about 150 protesters were on their way to Calais stopped by the police.

French President Hollande has said he will close the migrant camp before the end of the year.