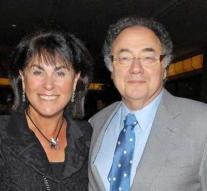 toronto - The police in Canada thinks that billionaire Barry Sherman and his wife Honey are murdered. They were a 'target', according to the BBC, according to the police. Earlier, another theory was adhered to.

For a long time the police thought of a suicide murder: billionaire Barry would have killed his wife first, and then herself. Their bodies were found hanging from a balustrade by the pool in December.

Barry Sherman was the founder of the pharmaceutical company Apotex. He was found together with his wife by a real estate agent who was busy selling their villa. Sherman had just put his house, with a pool in the basement, for 7 million dollars.

The couple, according to family members, have just welcomed a new grandchild. They were also planning a holiday. Honey Sherman would have sent an email to friends that same week to ask when they could see each other in Florida. 'I am from 18 December, Barry is the 25th', the mail is quoted in the The Globe.

'We are going back together on January 12. Please let me know what your preferences are, then put them in the calendar. '