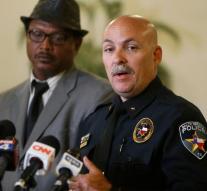 austin - A police corps in a Dallas suburb has fired an agent on Tuesday that killed a 15-year-old boy last Saturday by shooting in a car with unarmed teens.

The police village of Balch Springs stated in a statement that the agent was fired because he violated different rules of the corps. Because the agent can appeal to the resignation, the police department did not want to provide further details.

According to the police department, agents sat on a car with teenagers on Saturday after they heard shots. However, the teenagers wanted to go out, which the agent would have shot. The boy was hit and died on the spot.

Video images do not match the statement given by the agent, so did police chief Jonathan Haber know.