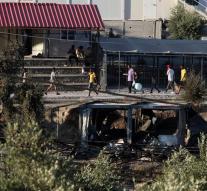 athens - During a police raid, 53-month asylum seekers were arrested in the Greek Moria reception center on Lesbos. The migrants had no papers or were rejected for the second time for a residence permit.

In the refugee camp last week there were many riots where 31 refugees were arrested. Dozens of young people from mainly African countries have set fire and thrown stones to the police. They protest against their forced return to Turkey. The EU-Turkije last March stated that migrants who do not have asylum in the European Union are being returned to Turkey.

For Lesbos, around 4000 refugees have been in shelter camps for months. In total, approximately 15,000 refugees in the Greek islands expect their status.