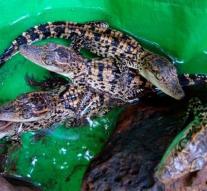 The approximately 25 centimeters long crocodiles were about fifteen days old and probably traded in Vietnam. Police in the Guangxi Zhuang Autonomous Region said they saw three nervous-looking men which goods moved to the front of the house where the crocodiles were found. Agents approached the men for questioning. A man was arrested while two others escaped.

Siamese crocodile skin used for handbags and other luxury leather goods. In China, the reptiles may only be bred with a permit. Trade in crocodiles is illegal.


China is an important market for many products that are made from exotic and often endangered species.