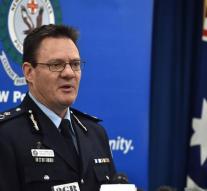 sydney - Two suspects suspected to have prepared an attack on an international flight from Etihad Airways from Australia were also planning a second attack. They wanted to spread poisonous gas under a crowd, the Australian police announced on Friday.

The police talk about an 'advanced plan.' 'One of the men had given his unsuspecting brother an explosive, packaged as a meatmill. The instructions for the bomb came from Islamic State, but the brother did not come on board. The other plan for poison gas was not yet far elaborated, according to the authorities.

The police and the anti-terrorist unit arrested four terrorist suspects at the end of July. They were arrested after invading the suburbs of Lakemba, Surry Hills, Wiley Park and Punchbowl.