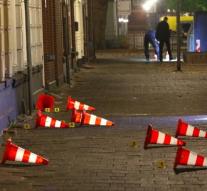 rotterdam - The police have to solve a warning shot at two different incidents in Rotterdam. A total of three people were arrested.

At a shooting in the Nassau port a man hit his foot. Agents then arrested two men after unloading a warning shot.

Also in the Grondherenstraat the police unleashed a shot. Reason was a battle where someone could carry a firearm. No one got injured and a suspect was detained.