Home / World / Police: Shooter was not related to IS 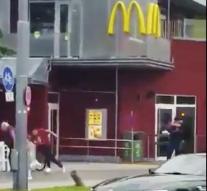 - The perpetrator of the shooting in Munich was born in that city and had no ties to Islamic State.

That Saturday, the police declared the Bavarian capital.

The eighteen year old German Iranian was still at school. He had, according to the police a clear interest in previous violent incidents. When a search found a book about such incidents.


During the shooting were 10 dead, including gunman, and 27 wounded.