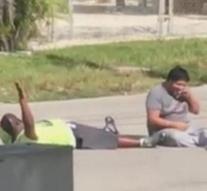 - In the United States fuss about a new shooting incident in which the police opened fire on a black man. This time it was the unarmed victim on the ground, with his arms in the air, and saw officers shoot compelled.

The 47-year-old therapist Charles Kinsey was trying to soothe his autistic patients when he was shot in the leg, he says at the local station WSVN-TV. can be seen on a video and told Kinsey was talking to the officers, asking them not to shoot and let them know that autistic man has only a toy with him.


After a tense conversation shoot one of the officers in his leg. The shot of the agent is not captured on video. 'It felt like a mosquito bite when the bullet hit me,' Kinsey said from his hospital bed. 'I still had my hands in the air and I said, 'No, I'm hit!'. I asked, 'Why have you shot me,' and the officer replied, 'I do not know. ''

Kinsey then turned on his stomach and handcuffed by the police and he has twenty minutes waiting for transport to the police station.

Kinsey's lawyer is furious. 'There is no justification for the shooting of an unarmed man who talks to you and says he has no weapon and that he is a practitioner. '


Police said officers responded to a report of a man with a gun who threatened to commit suicide. There is an investigation into the shooting.