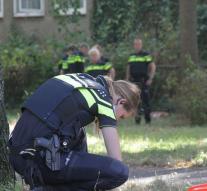 zwolle - Police in Zwolle Tuesday shot dead an aggressive stray dog ​​after a dachshund and a woman had been bitten.

Police found after a report the dachshund severely injured by Councilman Alferinkweg in Zwolle. The owner of the dog was found to be bitten.

Eventually, the police decided to shoot the dog dead because the situation remained threatening.

The badly wounded dachshund was taken by the animal ambulance. His owner was taken to hospital by ambulance.

The owner of the shot dog has not been found yet.