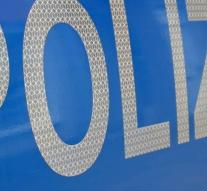 hannover - Police in Germany has about 140 hooligans from Frankfurt Saturday returned to their city. There were masks on their way to Hanover for a match of their club Eintracht Frankfurt.

Police believe that the men were planning in Hanover to brawl with supporters of the football club Hannover 69. One of the men also had a glove filled with coarse sand. " These are things that you normally do not bring to a stadium ", police said.

The police returned the club to the border with the state of Hesse where Frankfurt is situated in.