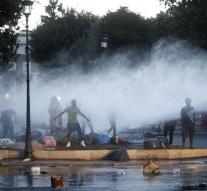 rome - The police of Rome cleaned the Piazza Independenza in a rubbish atmosphere on Thursday.

About a hundred refugees have been protesting at the square since Saturday after they had been ordered to leave a neighboring squat, where they stayed for some time. Agents in battlefields exude the protesters using water cannon and weapon. The immigrants, especially Eritreans with a residence permit, responded with shouting and tried to return.

The square, not far from the Roman main station, was lined with mattresses, trashed trash cans and broken plastic chairs. At the office building, where hundreds of crackers lived for five years, a banner with the text 'We are refugees, no terrorists' in Italian.