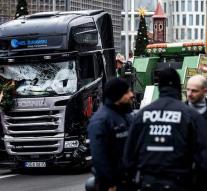 berlin - After the terrorist attack at the Christmas market in Berlin last year, the police reacted very late. In the hours after jihadist Anis Amri was transported to visitors by a truck, the security services had been seriously inadequate. This is evidenced by the report of an evaluation committee, which quotes the news platform RBB and the Berliner Morgenpost on Friday.

The search that should follow after a terrorist act was only started after three hours. At that time, the agents had not yet searched for the area of ​​Breitscheidplatz, where Amri killed twelve people and injured nearly seventy, and also failed to check the streets and stations that could serve as escape routes. The perpetrator could leave Berlin unhindered and was shot dead in northern Italy only a few days later, after being in the Netherlands too.

'The evaluation committee had to make a no-one and no-one-sighted analysis of the progress and note the weaknesses,' said a spokesman for the city council. 'If mistakes have been made, it's good and important to talk about it. '