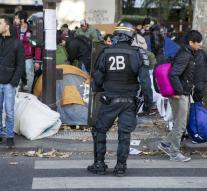 - French riot police on Monday raided a migrant camp in Paris. Officers checked the identity of asylum seekers, while a small part of the camp was demolished with a backhoe.

Some 2,500 migrants have sought refuge in the makeshift camp at Stalingrad Metro Station. According to French media published earlier similar camps in the French capital. In total, for about 19 000 migrants have been transferred since June 2015 to temporary shelters.

According to municipal officials, the number of migrants sleeping rough in the area with about one-third increase since the dismantling of the 'jungle'. The demolition of the migrant camp in Calais was completed Monday.

It is still able to stay in their shelters question how long migrants at Stalingrad. According to France24 should identity checks possible preparation for an evacuation. The council has urged the government urged to close the camp quickly, according to a letter which was seen by Reuters.