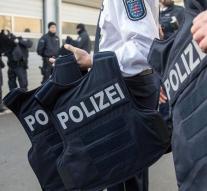 berlin - A special of the Berlin police commando unit Thursday raided a meeting of Salafis in the district of Moabit. The sought Tunisian Anis Amri, who is suspected of the attack on the Christmas market, would come there frequently.

That said, a representative of the local security services against news agency dpa.

The Berliner Zeitung reported that the action against mosque association 'Fussilet 33' light grenades have been used and a door is inflated.

According to the Berlin OM came Islamists, mainly Turks and Caucasians together in the center of religion by fundamentalist Sunni imams. They have tried to radicalize believers and to recruit for the armed struggle in Syria and Iraq in support of the Islamic State.