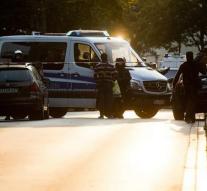 - Police in the northern German Hildesheim Wednesday raided a mosque that serves as a gathering of radical Salafists.

The police had the German-speaking Islamic Circle of Hildesheim, which holds the mosque, some time in the grain. Eight members searches were conducted. It is not known if people have been arrested.

According to the German authorities, the mosque is a breeding ground where Muslims radicalize and their participation in jihad is encouraged. Besides calling leaders in sermons and lectures to hatred against unbelievers.


Wednesday was the police action, where 350 heavily armed policemen were deployed over.