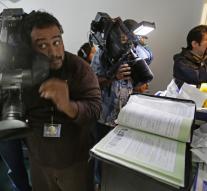 - US federal investigators FBI Saturday (local time) raided the man who would have purchased the machine guns used in the massacre in San Bernardino. That NBC News reported.

The resident would have been a friend of gunman Rizwan Syed Farook, who would have lived many years in the house next door. The men tinkered according to local residents often cars together. The friendship was some time ago subsided.

According to officials the resident bought the automatic weapons already in 2011 and 2012. It is the researchers still unclear whether he did so at the request of Farook. Perhaps he took the weapons later on.