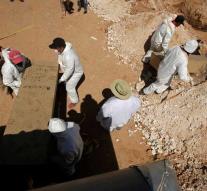 mexico city - The Mexican police have discovered 32 mass graves in the Mexican state of Veracruz. The public prosecutor announced at a press conference on Thursday that a total of 166 bodies were found.

The findings were made after an anonymous informant indicated at the beginning of last month where the bodies had been dumped. The exact locations have not been announced. An initial investigation shows that the remains were probably more than two years ago.

It is not the first time that mass graves have been discovered in Veracruz. The eastern state is suffering from violence between rival drug gangs. In March last year a mass grave was discovered with about 250 skulls.