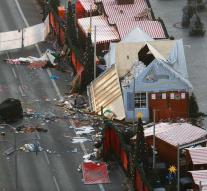 berlin - Authorities in Berlin also delve into hospitals in Berlin and the surrounding state of Brandenburg to the perpetrator of the attack on a Christmas market. They assume that he was injured. The local radio station RBB reported Tuesday that has several clinics are searched.

In the early morning a suspect was arrested, but soon turned out to be the culprit.

Several indications suggest that the culprit is not unscathed come from. The truck Monday evening on the Christmas market at Breitscheidplatz thundered, became seriously battered. According to Bild'd Polish truck driver who was later found dead in the cabin also have resisted those who hijacked his truck.

Police have DNA material secured in the cab. It is not the only trail that might lead to the perpetrator. Police Chief Klaus Kandt claimed Tuesday to be examined eighty serious tips from citizens. The police has deployed video and search dogs. Kandt said good hope to have results.