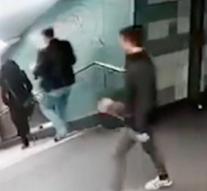 - Police have identified the man a 26-year-old woman suddenly kicked from behind a staircase in one of the underground station in Berlin on October 27. The perpetrator has not been caught.

The case led to emotional reactions in Germany and beyond. The woman broke her wrist during her fall. The perpetrator and three companions then walked away totally unfazed. In addition to the senseless violence also came across the fact that the police camera footage of the incident until last week held himself with great reluctance.

According to German media, the offender is a Bulgarian, who would have fled abroad after the revelation of the film images. The police said in Berlin after pulling that information.