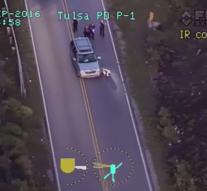 - "A police officer last Friday shot dead an unarmed African-American in the US state of Oklahoma. It is yet another case- suspected adaptability- unnecessary police violence."

"Released on images to see how a man with hands over head slowly on the street get to a stationary car. From behind him approaching four police officers with weapons drawn. Then the man is bleeding profusely on the ground. The agent would once have shot the man. Another policeman hit to a teasergun."