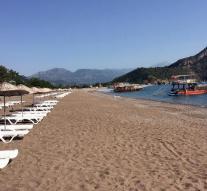 antalya - Tourists are in the holiday region of Antalya and Kemer escape an attack. From the mountains yesterday, three rockets were fired at a group of policemen at a fish stall. Which missed their target. There is also shot on emergency services. No one was injured.

According to travel companies, there are currently an estimated 20 000 Dutch tourists in Turkey, most of them near resort of Antalya. ' They are not in danger. This attack was not directed against them, 'said Corendon boss atilay uslu.

It was last night unknown who the perpetrators. A manhunt had yielded nothing. The wave of terror does tourism in Turkey this year not good. The holiday will receive in the summer season 40 percent fewer visitors.

Also from The Netherlands assume 30 percent fewer people according to Uslu Turkey. However ' the autumn weather is reasonably popular. This autumn we will fly approximately 10 000 Dutch to Turkish sun. There is booked every day, because the prices are low. '

ANVR travel agencies gain after the attack on the police hardly troubled consumer response. ' They understand that the risk of being involved in violence in Turkey, is extremely small, no larger than elsewhere in Europe. It went well. '

Next month expires the tourist season in Turkey. ' This winter we see alongside Spain, West Indies and Gambia that the Egyptian Red Sea, especially in Hurghada, comes back strong. Also, there is now cheap. A week flight and stay at a five-star resort will cost 399 euros. Airport, restaurants and attractions are extra secure, 'says Uslu.