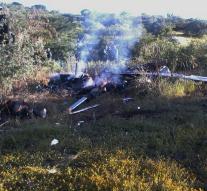 - Criminals have a police helicopter shot down in western Mexico. Therefore, three policemen and the driver were killed, according to Mexican media Wednesday.

The incident was Tuesday at the site Apatzingán in the state of Michoacán. The helicopter was used in an action against a crime syndicate. The gang members took the helicopter under fire. The device caught fire and crashed.