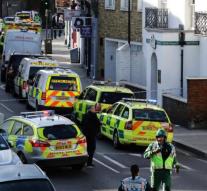 london - The explosion in the London subway is treated by the police as a terrorist attack. That's what the BBC reports.