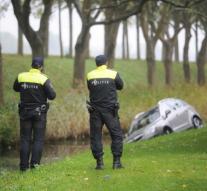 amsterdam - The police managed to crack two so-called PGP phones, which were used by the suspects in the assassination of Peter Raap, alias Piotr in November in Diemen last year.

Which revealed prosecutor mr. Plooij Wednesday on the pro-forma session where four suspects in the attempted liquidation stand trial on Raap.

Thanks to cracking the secure crypto phones the police could decipher the message traffic around the wound. It shows that two of the suspects were driven by an unknown man. The victim's car was equipped with a gauging station, so the suspects could follow him unnoticed. In Diemen was Raap- known in the Amsterdam underworld- under fire. He managed to survive the attack by hard driving away with his Opel Mocca. However Raap was seriously injured.


The suspects were already in advance by police monitored and could be arrested shortly after the assassination. The men were found in possession of PGP phones. These devices- usually Blackberrys- are very popular in the underworld because the idea was that they were not eavesdropping. This now appears to be a myth. see for the first time let justice that the phones are indeed crack and messaging, such as SMS and e-mails- can be traced. The four suspects were not this morning at the meeting site.