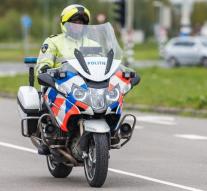 the hague - Motorists will have the first of 1100 new motorcycles from the BMW and Yamaha brands at the end of this year. The BMW's (BMW R 1200 RT) are used for traffic surveillance, the Yamaha's (type MT-07 Tracer) are used for the watch surveillance.

The contracts for the delivery of the new motorcycles are still signed this summer, announced the police on Tuesday. It's not a big-scale but a gradual influx of new engines.

The police came to the purchase of new equipment after consideration of issues such as completeness, quality and price. In addition, it looked at technical and ergonomic features that are in line with the labor legislation. Both experienced and young motorists are involved in the selection during test days. In addition, it was taken into account that female motorists should also feel at home soon on their new motorcycles.