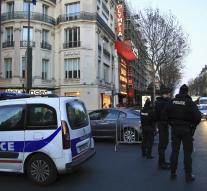 brussels - The Belgian police have certainly missed thirteen chances to unmask the perpetrators of the terrorist attacks in Paris before they could strike in November. That came in six cases due to lack of manpower, it is clear according to the time of the final report of the research supervisor Committee P has done.

The supervisor went after the bloody attacks after what the Belgian police knew about the perpetrators. Which had already in February 2015 telephone records held which revealed that Salah Abdeslam had contacts with known terrorist suspects. Too little staff was that information not done anything.

Also suicide bomber Bilal Hadfi, according to the business newspaper already known. That, however, remained six months, again due to lack of available police for further investigation. Even knowing that the brothers Abdeslam were radicalized not lead to an effective approach.

Furthermore, a request from Spain on a voyage of Brahim Abdeslam, was held in March 2015, only answered after the attacks in the French capital. Knowledge of impending attacks in Western Europe led by Abdelhamid Abaaoud furthermore too long not shared with the Belgian prosecution.