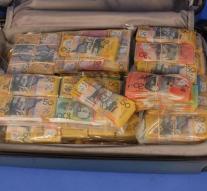 sydney - The federal police of Australia are looking for someone who has left a trunk of 1.6 million Australian dollars (over 1 million euros) in a warehouse. A call to the owner to report was mainly a hilarious response.

Police officers found the suitcase in Sydney during a drug smuggling investigation. That followed the call on Facebook. 'If you think this is your cash, we're eager to talk with you,' police said Monday. 'And with' conversation 'we absolutely mean we will ask you where you have a suitcase of money. '

According to Australian media, the message delivered almost 2000 comments in one hour. Some internet users are joking that the money they were e-mailed was promised by a Nigerian prince. Another Facebook user believed to be entitled to the money because the taxpayer had previously 'robbed him of such amount'. '