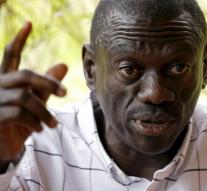 The Ugandan police have arrested Monday opposition candidate Kizza Besigye. The police called a,, preventive 'measure; Besigye had, according to the police rounded up a group of youths to storm the office of the Electoral Commission in Kampala.,, We had information that they were planning to cause violence in the city, 'said a spokesman.

Besigye lost Saturday's election of President Yoweri Museveni. According to observers, was that elections have something to say.