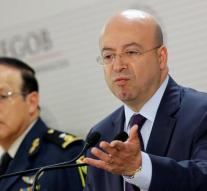 - Authorities in Mexico on Friday arrested a former police chief in connection with the disappearance of 43 students. Felipe Flores had two years on the run. He could be maintained according to national security commissioner Renato Sales when he visited his wife in Iguala.

Flores was the police chief in Iguala when the student disappeared in 2014. Research showed that young people have been kidnapped by corrupt cops and later transferred to a drug cartel. According to the government, the students were killed and set on fire. The remains were later thrown into a river.

The case has brought the Mexican government greatly embarrassed. So far identified the remains of one of the youths. The families of the other 42 students demand that the authorities come up with answers about the fate of the students.