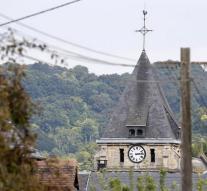 paris - French police on Tuesday arrested a person suspected of involvement in the hostage in the church in Saint-Étienne-du-Rouvray and the murder of the elderly priest.

A second victim is in danger. Two perpetrators, who claimed to act on behalf of the Islamic State, were shot. The arrest of a third man was announced by a source close to the investigation into the circumstances of the terrorist act.