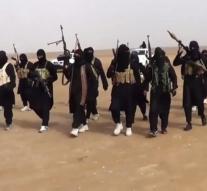 the hague - In a joint action against terrorist propaganda, agents from Belgium, the United States, Greece, Poland and Portugal found more than 2000 videos and al-Qaeda and Islamic state messages. They are passed on to the providers, to remove them.

The European Police Office Europol has escorted the action on 25 and 26 April from the headquarters in The Hague. The videos and messages were in six languages ​​on 52 platforms.

The agents found a new way terrorists can spread their message and finance their work, but Europol does not say what this way is.