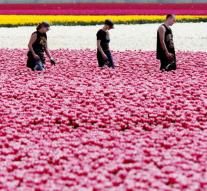 - In the Netherlands there Poles have relatively more jobs than native Dutch. The Poles living here are relatively young and that plays a role. Of Poles aged between 15 and 74 years, 71 percent work, compared with 68 percent of the indigenous population. According to research by Central Bureau of Statistics (CBS) to developments on the labor market between 2003 and 2013.

Also, people from Portugal and Hong Kong or with roots in Indonesia rank highly when it comes to employment. In absolute figures were measured on October 1, 2013 96 000 Poles working in the Netherlands, Hong Kong was the country of origin of 16 000 people and the Portuguese group counted 18 000 people.

The lowest percentage occurs in people from countries such as Afghanistan (45 percent) and Iraq (37 percent).