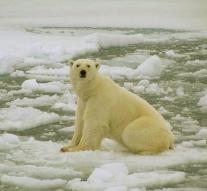 - "Polar bears already beset meteorologists five days in a remote Russian weather station on an island in the Kara Sea in the Arctic. TASS news agency reported that more than ten pacing around a weather station depend on the island Trojnoj."

"The head of the station, Vadim Plotnikov, said that was deleted a part of their meteorological observations because it is too dangerous to go outside. So there is a female polar bears under a window of the building."

"Plotnikov to the authorities in Arkhangelsk alarm beaten about the siege, but as yet there is no help coming. He was told that there is a supply ship in a month. That will include fireworks that the bears are chased. A regulator said Tuesday that the station has a firearm."

"The island in the Arctic is 4,500 kilometers from Moscow."