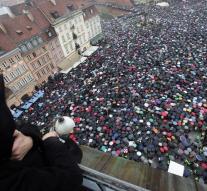 warsaw - After protests by tens of thousands of Polish women, the Polish government backed down and removed a controversial bill that would ban abortion outright, let's beaches.

The proposal was Thursday in the second reading by Parliament with 352 votes against 58 and 18 abstentions rejected. The Conservative Party for Justice and Justice (PiS), which governs with an absolute majority, the bill had supported earlier. It provided a total ban on abortion and prison sentences for women and doctors who undergo or perform.

Tens of thousands of men and women protested Monday against the bill. The existing Polish abortion law is already among the strictest in Europe.