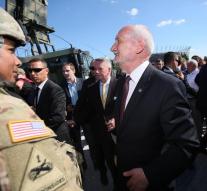 warschau - NATO member Poland wants to pump 130 billion euros in its defense in the next fourteen years. The funds are mainly intended for the 'technical modernization' of the army, said Defense Minister Antoni Macierewicz on Tuesday.

Poland will eventually increase its Defense spending to 2.5 percent of gross domestic product (GDP), stressed the minister. His ministry has submitted a bill to Parliament to reach this goal by 2030. At present, Poland's Defense contribution amounts to 2 percent of GDP.

With this, Poland is now one of the few NATO countries that meet the agreed target of at least 2 percent of GDP on arms spending. The other countries are the USA, Greece, Estonia, Great Britain and Romania. 'If you want peace, prepare yourself for war,' said Macierewicz.